Bird Personality is a concept of human personality introduced by Dr. William Marston, developed in the late 1920's. One's personality can be categorized by four major personalities such as Dove, Owl, Peacock, Eagle (DOPE) :

DOPE also generally known as the DISC personality (Dominant, Influence, Steady, Compliant). Eagle as Dominant, Peacock as Influence, Dove as Steady and Own as Compliant. 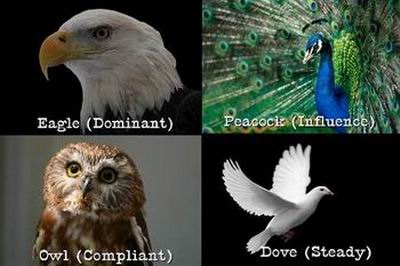 Another type of bird personality test is using fingerprint analysis method. In the fingerprints analysis, what is being analyzed is the profile attached to a person genetically (innate personality). Different from other test that requires a series of questions, the fingerprints analysis does not require questions or interviews due to it only demands for an observance on a person's fingerprints, therefore the results shall not be influenced by a person's psychological condition, such as mood swings, lies, manipulation of answers and other similar conditions.

Each of bird personality is divided into some personalities : 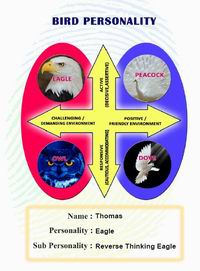